38-year-old Mercy Nkatha lost her job, kept a secret from her partner, became an entrepreneur, and lost millions.

After her contract ended as a receptionist in one of the leading hotels in Nairobi, Mercy did not disclose this to her partner. She woke up every morning going to work, only that this time, it was a different venture.

Determined to make it work, she researched on business ideas she could set up with her savings. After long contemplation, she decided to become a fruit vendor as it felt most accomplishable. By getting her produce from Marikiti market, renting a stall at the newly erected business premise site of the Simmers restaurant along Kenyatta avenue, her plan for a fruit business was set.

Mercy hired an assistant who would help in the operations at the shop and distribute fruit salads and juices to beauty parlors and offices. The business grew slowly. She even had walk ins customers at lunch time which was their busiest hour.

Months into the business, she decided to share her secret with her partner. All the strength she had mastered was however shattered by a phone call one early morning. Mercy received news that a bulldozer was on site to take down the business premise, with instructions from the County Government.

“I felt my life flash before my eyes. With no ample notice to vacate and no one on location, I could not salvage anything. All the equipment was damaged. That same morning, my assistant had restocked produce worth Ksh 40,000 from the market. In the house I had ripe produce inventory of 100kgs of paw paws, 150kgs of avocados, 200kgs of mangoes among others and paid stock for the next inventory that was to come in days.” Mercy recounts the painful ordeal.

By her calculations, it was a setback that ran up to millions. Hoping to clear her stock quickly with no point of restart, she sold her produce at low prices to cut down on losses. This loss let her see the gap in the business for perishable produce.  “I felt defeated. I did not have the energy to start over. After informing my clients of the sudden business closure, I packed my bags and moved to Sagana to live with my husband.” Mercy narrates.

As a full time housewife, she did her research exhaustively and one evening, she proposed to her husband about venturing in agriculture. On agreement, they decided to take a loan and purchase a two-acre piece of land in Kirinyaga. While the bank held the property as loan security, this did not deter them from developing and engaging in agricultural practices.

They dedicated the largest portion of the land to growing fruits like mangoes, avocados, tangerines and bananas to ease the burden of management and one section a variety of vegetables and crops like beans, kale, capsicum among others. “I literally had to learn on the job. I was content with being a full time farmer but with no experience. We faced our fair share of challenges, losses and blessings.” She recounts.

Today, Mercy is popularly known as mama matunda for the thriving success she has had over the last five years. She re-opened a fruit store in Sagana that is doing well.

What she did differently

Teach a man to fish, and you feed him for a lifetime. These words have been a daily mantra for Mercy as a reflection to her failed business. With lessons learnt and extensive research, she discovered she would revive her business by prolonging the shelf life of fresh fruits up to 12months by solar drying.

For starters, she started by experimenting the process with her produce. She washed, peeled and sliced 10 mangoes and air dried them. She placed the sliced mangoes on a tray and covered it with a black nylon paper and placed it in the roof of her house. It took her days to get the consistency of a dried mango since at night she had to take the fruit back to the house. It nevertheless happened for her. She had her dried mango.

With vigor, she decided to approach a company in Thika, Sweettunda which was partnering with farmers who had fruit produce that certified Good Agricultural Practices (GAP) and was export standard quality to make the dried fruits.

In her first year of partnership, she delivered three tonnes of mangoes which earned her a cool Ksh 2 million which was more than what she would have gained by selling the fresh fruit or juice. Due to the size of her land, she now says she has focused purely on growing fruits and especially mangoes for an annual supply. 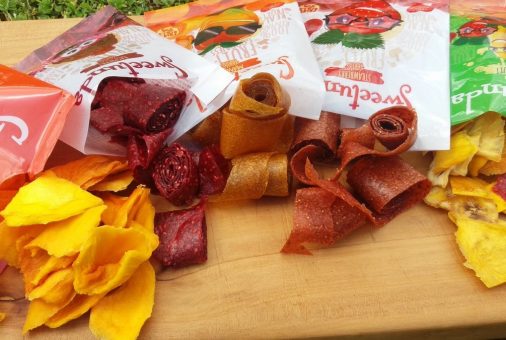 In spite of her success as a farmer and fruit vendor, she aspires to have her own dried fruits processing plant in the near future. Currently, she is using a solar drying box which is hoisted off the ground by wooden legs. The bottom is covered with metal sheets that reflect the sun’s rays inside the box and increases the temperatures. The inside is plated with mesh trays that allow circulation and a white plastic that covers the box like a greenhouse, to allow heat retention making the drying process quicker.

“A 500g bag of dried mango flakes will require at least 12kgs of apple mangoes. I package the flakes and supply to the local markets in Muranga and Kirinyaga on pre order. I also sell the product at the fruit store where a 250g of mango flakes will go for Ksh 220 and so forth depending on the weights,” said Mercy.

The dried fruits can be enjoyed as a snack for adults and children and even incorporated in breakfast meals like oats as a sweetener. Her advice to fruit and perishable produce farmers is to get themselves involved in post-harvesting management. This will not only ensure food security but add value to their business as the benefits are much higher.