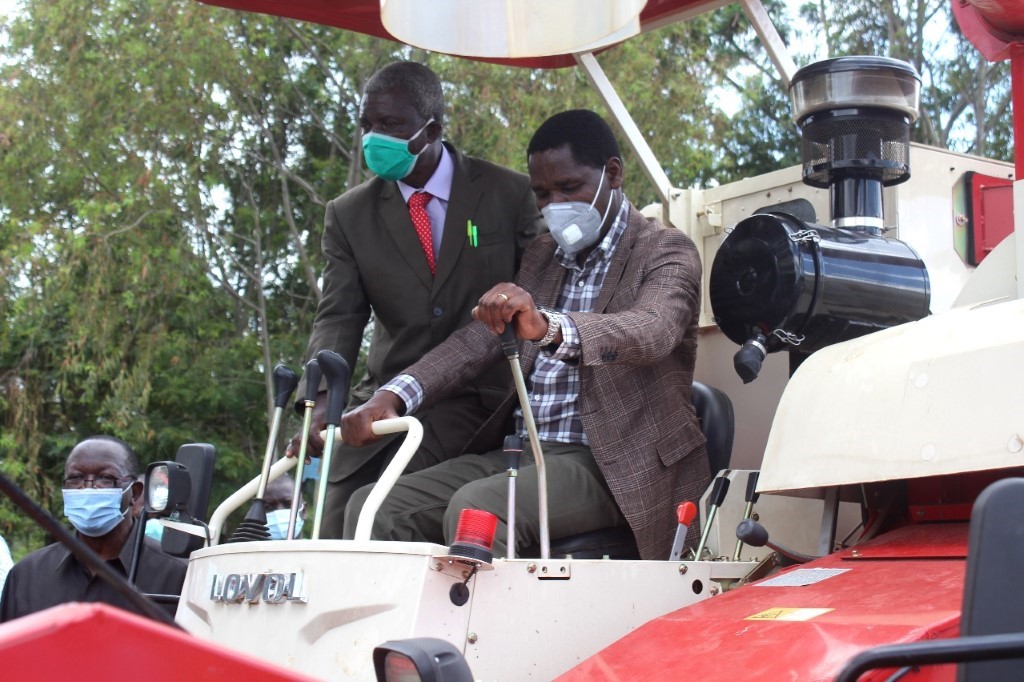 Rice farmers in Bunyala area of Busia County have received three pre-planters and three combine harvesters that will enable them to increase their production.

Agriculture Cabinet Secretary (CS) Peter Munya, handed over the machinery to Bunyala Cooperative Society at Busagwa primary school in Bunyala Sub County. Speaking during the event, the CS said mechanization is the only way to bridge Kenya’s rice production deficit that currently stands at 986,000 metric tonnes.

The machines were given to the farmers through a pilot agro-mechanization hub for a three-year incubation period.

“Kenya has been forced to import rice from Pakistan and other countries to meet the shortfall. It’s for this reason that the government is implementing sustainable agricultural intensification, mechanization, expansion and marketing strategies to bridge the gap.” He said.

According to the CS, the machines will optimize farmers’ outputs by increasing land under rice production in the region by 11,000 acres capable of feeding the entire region.

Busia Deputy Governor Moses Mulomi commended rice farmers for this season’s bumper harvest attributing the increase in production; from an average of 20 bags to 40 bags per acre to mechanization.

He said value addition in both rice and fish farming is critical if the farmers are to reap big from their agricultural activities. “I hope to see Busia rice packaged in Bunyala and availed in local supermarkets across the county with by-products used in production of feeds and other products.”

Bunyala Rice Farmers Cooperative Society chairman Robert Musolo lauded the Agriculture CS for identifying their society; which has increased membership from 301 in 2019 to 630 in 2020, as a pilot agricultural hub noting that the move will improve rice production in the region through the use of mechanization and modern technology.

The County Agriculture Executive Moses Osia requested CS Munya to allow his  Ministry’s engineers, to facilitate installation of a rice milling plant donated by the Venezuela Government through FAO and the Ministry a request which the CS acceded  and directed imMediate commencement.

According to the Ministry of Agriculture rice is currently the third most important cereal crop after maize and wheat with its consumption estimated at 1,050,000 metric tonnes compared to an annual production of 160,600 metric tonnes.

It is grown mainly by small-scale farmers as a commercial and food crop. About 80 percent of rice grown in Kenya is from government established irrigation schemes, while the remaining 20 percent is produced under rain-fed conditions.

The mechanization hub model has been tried and has revolutionized rice farming at Mwea Irrigation Scheme.

With the support of the national and county government Bunyala Irrigation Cooperative Society, is expected to start enjoying benefits of these equipment and be in a position to surpass the current rice production on 2,100 acres of land with an annual value of Sh110 million.

For Livestock keepers, these machinery and equipment can be utilized to open up more land for fodder and pasture establishment to transform Busia County which has a potential of expanding its economic base and be a net exporter of animal products and triple its annual value of Sh5.1 billion.