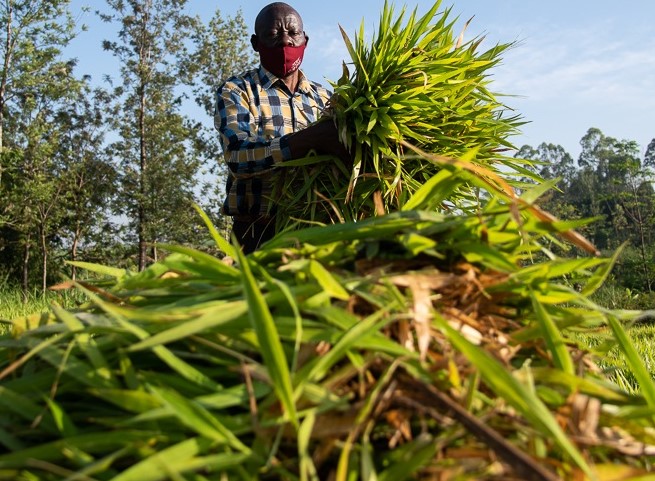 More than 1,000 dairy farmers in Western Kenya have doubled their milk production and grown their incomes by saving on high cost of feeds by growing their own high-quality and protein content, drought-resilient, fodder grasses.

This has been made possible through the “Grass to Cash” project of the Alliance of Biodiversity International and the International Centre for Tropical Agriculture (CIAT). Under the project, farmers have undergone training in production of new varieties of grasses and have been using demonstration plots since 2018.

The project has seen researchers work with farmers in Siaya, Kakamega, Bungoma and Busia counties to test ten new varieties of grasses that are higher in protein, lower in fiber and mature faster in order to boost both the quality and quantity of milk.

Dickson Osogo, a dairy farmer in Siaya County who joined the project two years ago says that he had three cows and struggled with high commercial feed prices as well as poor-quality Napier grass.

“I joined the Grass to Cash project out of curiosity and now, having attended trainings and tried new planting, farm management, harvesting and feeding methods, I have managed to buy two more cows and set aside half an acre of my farm to cultivate the grasses myself so that I can cut costs,” Osogo says.

He explains that when he first planted the cultivars variety and fed them to his cows alongside Napier, he noticed the cows preferred the cultivars and that is what motivated him to expand the area under production of the same.

“Now I have recorded an increase of up to six litres of milk per cow from milking twice a day. I use less grass to feed the cows unlike when I used to use Napier. The grasses also mature fast. When I first planted them, they matured within 10 weeks.”

Since he introduced the grasses, Osogo has increased his monthly income from sale of milk to Sh. 37,500, up from Sh. 11,000. “I am now able to sell milk and still leave some for my family to consume, including my grandchildren,” says the father of nine. He has used the proceeds of the milk sale to educate his children and take care of other family needs.

Osogo is now a peer trainer with Send a Cow, a partner organization of the Alliance, working with 3,000 vulnerable farmers to improve their nutrition, health and income opportunities in the region.

“I train 35 farmers in Siaya County, demonstrating benefits of the grasses through sharing my experience. I also give interested farmers forage seeds, and visits their farms to advise them on good farm management practices for optimum grass yields,” Osogo said.

Ruth Odhiambo, a senior research assistant at the Alliance who worked with farmers to test the new grass varieties, says that they realized the biggest problem farmers in Western Kenya was lack of animal feed. Up to 80 percent of farmers relied on Napier, which has serious disease problems and which hinders grass production.

The Kenya Agriculture and Livestock Research Organization (KALRO) tested the grasses for suitability in local conditions before they were released to farmers.

David Miano, a forage agronomist at KALRO, said that even as governments works towards making agriculture a business, there is need to explore how to convert what is being researched into a money-making activities. “We have worked with development partners and farmer organizations to disseminate the forages, and each partner has had a crucial role to play in making the new grass varieties available to as many farmers as possible,” Miano said.

Advantage Crops, a partnering seed company, has collaborated with the research teams to commercialize some of the new forage seed varieties, making them more easily available to farmers within shorter distances and addressing seed shortages. Additionally, they have repackaged the seed into more affordable sizes, from 50-gram packs to one-kilogram packs which vary in price from around Sh. 3, 700 to Sh. 4,000 per kilogram depending on the variety.