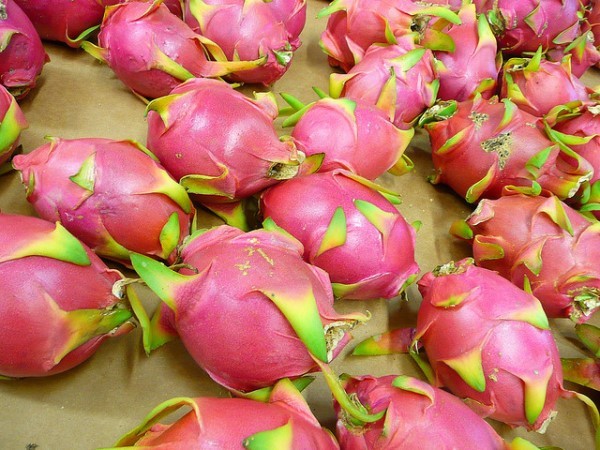 The pitaya, commonly known as dragon fruit, has in the recent past attracted the interest of farmers in Kenya, with early adopters minting some great returns.

A single pitaya weighs between 600 grams and 1.2 kilograms. The exotic fruits are outstandingly distinguished by their variant colours and taste. The red and purple-fleshed varieties are usually sweeter than the sour-sweet white-fleshed type.

The dragon fruit derives its name from its leathery skin speckled with spikes and therefore resembling the mythical dragon. Do not, however, be fooled by the strange outward look; the exotic fruit is quite juicy and succulent inside; similar to a kiwi or watermelon.

Numerous health benefits have been attributed to the fruit, for starters, it contains prebiotics, which are foods that feed the healthy bacteria called probiotics in the gut and is rich in anti-oxidants & vitamin C which boosts immunity. It can also be used to instantly cure acidity and constipation. It is also a low calories fruit encouraged for people with heart diseases, diabetes, arthritis and gut health issues, amongst other benefits.

Peterson Kinoti, who grows around 4,000 dragon fruit plants in his two-acre parcel of land in Meru County, reckons that the plant is the future of farming in semi-arid regions. “One of the advantages of this crop is that it can grow in areas with extremely high temperatures and the poorest of soils, though sandy soil is generally preferred,” Kinoti said. “The crop is best suited for the tropical climate with an annual rainfall of 40-60 cm and temperature ranging from 20°C- 30°C.”

“Another advantage of these crops is that they require very little space compared to other fruits like bananas. This makes it ideal for urban farmers as they can be grown even in containers,” Kinoti expounded. Dragon fruits are climbers that can grow up to 30 feet tall, thus need their vertical growth curbed and supported through structures. Four cuttings can be planted per one post, one or two for wooden poles four inches wide and six feet high.

Kenyan farmers who have successfully grown the dragon fruit say it is an easy crop to manage and maintain as it is hardy and has negligible cases of pest and disease attacks. Whilst the plant is drought resistant, regular watering e.g. once or twice a week will ensure growth and the yield potential remains at peak, watering frequency can however be dictated by weather conditions. The fruit requires nutrients rich in nitrogen, phosphorus and potassium to enhance growth and encourage flowering and fruiting.

To succeed in farming this fruit, it begins with the selection of mature rooted cuttings of vine seedlings that are at least two years old and over 30cm in length; these take 9 to 18 months to mature, depending on ecological zone. A cutting is locally sold between Ksh. 300 and Ksh. 500. Growing from seeds takes about four to six years while using cuttings that are undeveloped (less than two years old) take at least two years.

Almost every bit of a pitaya plant can be consumed; its roots, flowers and peels can be used to make herbal tea, its stems soap while value can be added to the fruits to make wine, juices, yogurt and smoothies. The fruit is not highly perishable because it stops ripening once harvested. With this, it can last for at least 18 days without refrigeration and up-to 2 months in the fridge.

Local demand for dragon fruits has rapidly increased over the last two years, especially with the increase in people who are conscious about their health and nutrition. This has seen large supermarket chains and groceries begin to stock this fruit. “The fruit is in even higher demand among the Asian communities in the country; I currently have weekly orders of two tons from a Chinese restaurant in Nairobi,” Kinoti explained.

With an eighth of an acre, Munene; another dragon fruit farmer in Makuyu is confident that he will be able to educate his children to all desired levels of education. Before the onset of the Covid-19 Pandemic he had been selling his fruits at the farm gate at Ksh. 1,000 but since the pandemic hit Kenya, the cost reduced to Ksh. 890.

Munene calls it a goldmine venture, though he foresees that the fruit’s novelty might wear off as more farmers begin growing it. He explained that the price is bound to fall to around Ksh. 500 per kilogram as the forces of supply and demand normalize in the future.

Piece of advice to interested farmers; the early bird catches the worm.