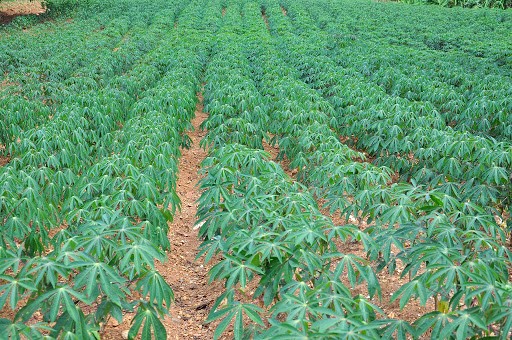 Researchers at Egerton University are banking on new cassava varieties to encourage alternative farming of the food crop in Nakuru, in the wake of reduced maize yields in the county.

The initiative dubbed, ‘The cassava value chain Community Action Research Project (CARP),’ funded by the Master Card Foundation through the Regional Universities Forum for Capacity Building in Agriculture (RUFORUM), is also seeking to boost value addition for cassava, which is largely consumed as subsistence food in Kenya’s rural households.

Lead scientist Prof. Richard Mwanza Mulwa said rural communities in drier, resource poor and food insecure areas of Lare, Lower Subukia and Solai were being targeted to adopt the improved varieties, which have a potential to yield 30 tonnes of cassava per hectare, three times what a farmer gets from traditional types.

The initiative targets to create jobs, increase food and nutrition Security, as well as improve cassava quality, productivity and its marketability both locally and abroad.

Kenya has 200,000 hectares (494,210 acres) under cassava. About 60 per cent of the crop is in Western, Coast area including Kwale, Lamu, Kilifi and Tana River, accounting for 30 per cent, while the rest is in parts of Rift Valley and Central.

The project is working on the less toxic, disease tolerant and early maturing sweet cassava planting materials for increased production.

The University is working jointly with the County government of Nakuru, Mtakatifu Clara Community Based Organization and East African Breweries in breeding varieties that are resistant to cassava mosaic disease and cassava brown streak disease that will be distributed to women and youth groups. The conventional cassava takes 10 years to breed, but the scientist hopes the new variety will take half the time.

“Cassava has a huge unexploited potential as raw material for a wide array of value-added products, from coarse flour to high-tech starch gels. Modified cassava starch can be used in the manufacture of alcohol, animal feeds and baked products. In advanced technologies the crop in an important base in the manufacture of plywood, paper and textiles.

These are some of the industry players that we will be linking our cassava farmers with. We are also very keen on the quality of cassava raw material churned out by growers” stated Prof. Mulwa.

It is expected that once the initiative is rolled out countrywide over 100,000 people, 60 per cent of them women, will acquire clean and quality planting materials and will be assisted to improve productivity and marketability of the food crop as a raw material for industrial needs.

In the model, farmers grow the crop individually but process and sell the products as a group. They also operate joint savings and micro-lending.