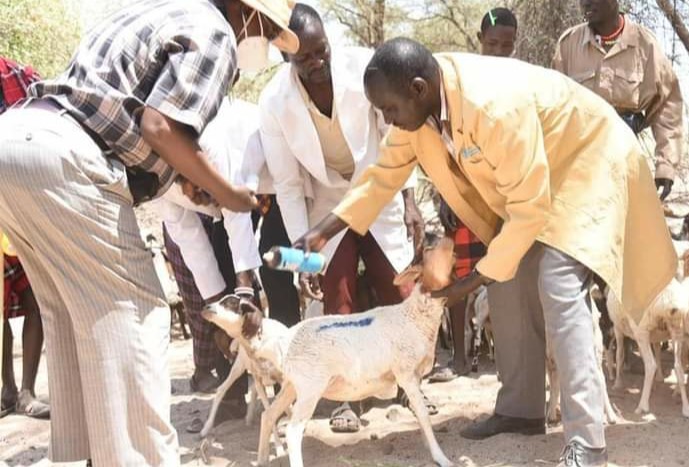 Food and Agriculture Organization (FAO) has donated assorted drugs and vaccines worth Sh. 4 million that will be used for vaccination of sheep and goats against Peste des Petit Ruminants (PPR), deworming and applied acaricides in Turkana South, Turkana East and Turkana Central Sub-Counties.

County Executive for Agriculture, Pastoral Economy and Fisheries Aemun Philip presided over official launch of a 10-day targeted vaccination, treatment and deworming of livestock at Napusimoru area of Turkana South.

As part of the post-locust recovery program, the County Government has provided the technical staff, and Peste des Petits Ruminants (PPR) vaccine while FAO has delivered veterinary supplies and vaccines through the ACTED organization.

Aemun said that the vaccination exercise would prioritize far-flung areas with large number of livestock whose main pasture and vegetation was mostly affected by the desert locust invasion.

“The department is commitment to working closely with Agro-vets based in Lodwar to see ways in which drugs outlets can be opened in those remote areas.” He said

The County Executive decried last year’s desert locust infestation that had caused significant damages to crops and livestock in all sub-counties where the pest destroyed crops and pasture while livestock developed avitaminosis and emaciation.

CEC Aemun while thanking FAO and ACTED organizations for their support, stated that the Pastoral Economy department will continue engaging development partners for resource mobilization to help curb spread of endemic, epidemic and emerging livestock diseases.

He said that the post locust recovery-program by UNFAO dubbed “safeguarding livestock-based livelihoods and improving food Security and nutrition status of the desert-locust affected households in Turkana” was meant to restore pastoralist livelihoods and resilience.

Yussuf said residents’ source of livelihoods had been affected by locusts and assured of Government efforts together with partners to help residents recover through distribution of livestock feeds as well as treatment of livestock, among other programs.

FAO’s head of Lodwar Field Office Dan Irura said the program had already started with distribution of feeds and the vaccination as a backup to strengthen animal health after destruction of pasture by desert locust.

County Director for Veterinary Services Benson Longor said that the exercise which will put into practice the integrated pest management 2020 targets to cover more than 75,000 livestock while ACTED organization representative Sylvester Ekunoit assured that all the selected parts for vaccination will be reached.