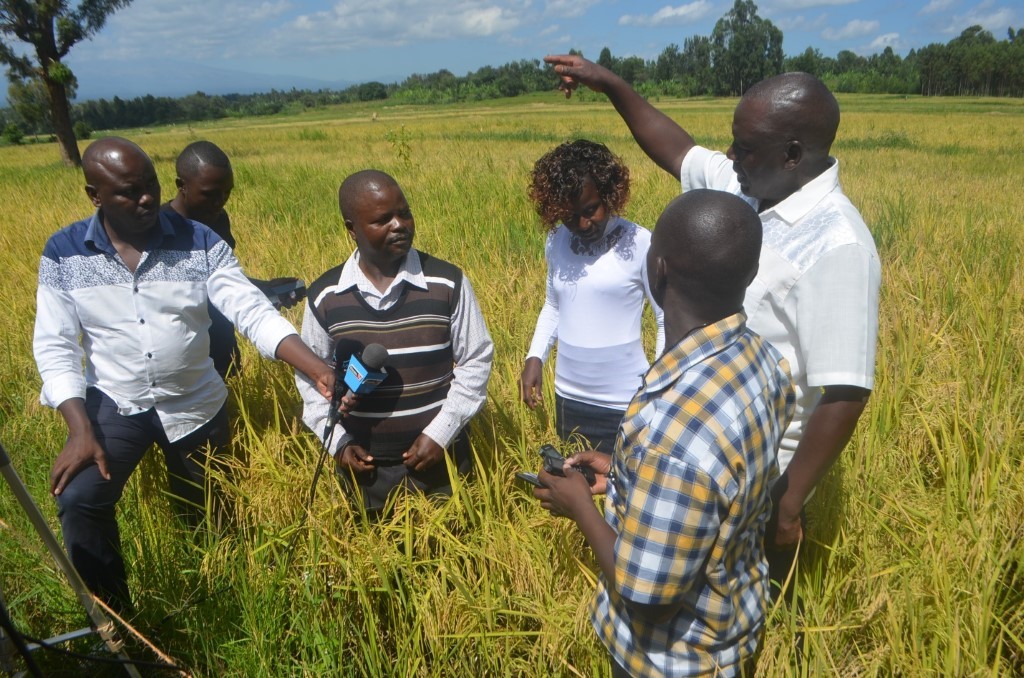 Rice farmers in Mwea have improved their crop after embracing the hybrid rice which is more yielding and matures early.

Already over 200 farmers at Kabatiro in the suburbs of Kutus town are preparing to harvest their rice, having been supplied with the hybrid rice seeds by a local NGO - Integrated Community Organization on Sustainable Empowerment and Education for Development (ICOSEED).

The managing director of the organization Patrick Muriuki said they target to engage over 400 farmers in an endeavor to increase rice production in the county.

He said the farmers who were supplied with the seeds have confirmed that the new hybrid variety, true to the expert’s words has matured much earlier than the traditional rice.

African Agricultural Technology Foundation (ATTF) has been collaborating with Kenya Agricultural Research and Livestock Organization and the local NGO in Mwea in the development of the hybrid rice.

Speaking during a field day in one of the rice farms at Kabatiro, Muriuki said that they were supportive of the president’s big four agenda especially on the food Security

“Our objective is to achieve prosperity for the farmers through technology as will be evidenced through the hybrid rice.”  He said

He explained that there is much need for the adoption of the emerging technology in order to increase rice production and reduce rice importation which takes a huge amount of money from the government.

Muriuki said the level of rice consumption in Kenya stands at 650,000 tonnes as compared to the production which is at 150,000 metric tonnes. As a result, the deficit is met by the importation of 500,000 tonnes of rice yearly.

”There is a big opportunity for employment in the increased production of rice in Mwea and in the global market and this is why we are encouraging the farmers to go hybrid” he added.

The consumption of rice has increased by 13% while productivity grew by only 3% and therefore the big need to jumpstart rice production in the country.

“Adoption of hybrid rice will enhance income for the farmers besides creating the much desired job opportunities for the youths in Kenya.” he said.

The hybrid project has already engaged 25 people who are on full time employment to deal with the challenge of inadequacy of information being availed to the farmers.

He said as a local Non-governmental organization, their role will be to facilitate the farmers acquire the hybrid seeds working in collaboration with other stakeholders like the Kenya Agricultural research and livestock organization (KARLO)

”Already national rice performance trials started 10 years ago have managed to come up with 5 types of hybrid seed which are being availed to the farmers for planting” Muriuki asserted.

”It is going to be an economic booster since the hybrid rice has been proven to yield three times more than the traditional rice.

According to the managing director, if farmers fully adopt the hybrid rice, they will be able to meet the deficit and reduce importation of rice from Pakistan and other far east countries.

“The reason the growth in consumption is higher than production is due to improved livelihood, rural urban migration and rice being food for the elites as compared to cassava known as poor man’s food.” He aded.

Stephen Thiga a rice production expert said the new rice variety apart for improved yield and early maturing is also better in the resistance of diseases and pest.

He said by 2030, Kenya should be able to produce enough rice to cut down the importation of the commodity into the country.

The most popular brand of rice grown in Mwea at the moment is Basmati 370 with 80% market share followed by Basmati 217.