Farmers Up Beat as Government Opens AFC Branch in Marsabit 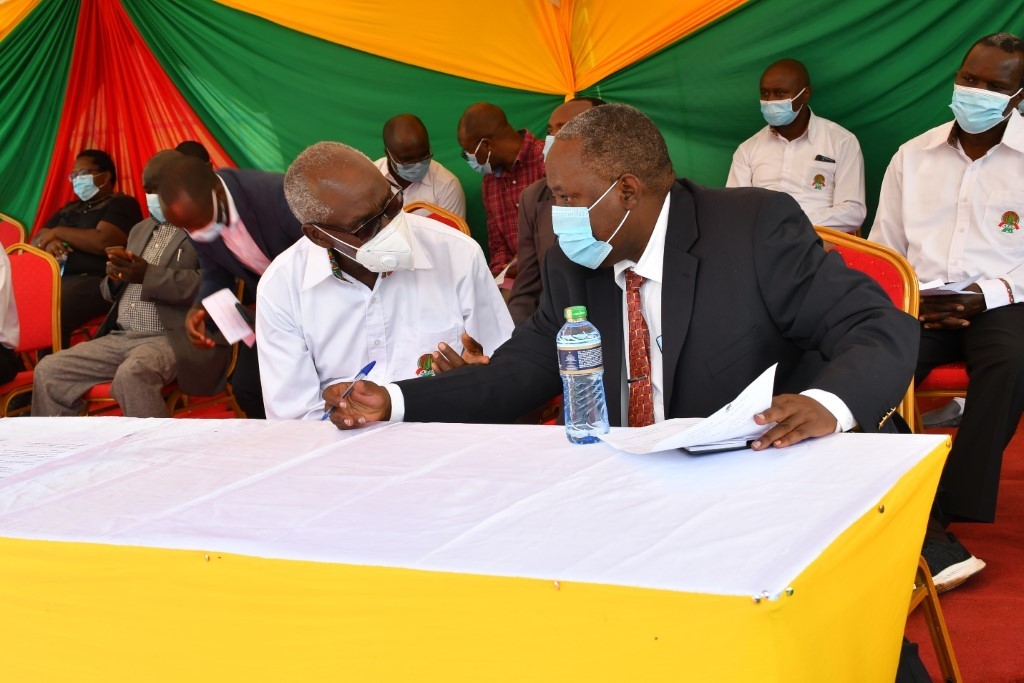 The Agricultural Finance Corporation (AFC) board chairman Franklin Bett has called on residents of Marsabit County to make use of loans being offered by the corporation in order to improve their food Security and create wealth.

Mr Bett said the government was committed to making every Kenyan self-reliant by extending credit that was not only affordable but flexible to enable them to generate wealth and transform lives.

The board chairman who was officiating at a groundbreaking event for the construction of AFC offices in Marsabit town said that the government would offer loans with low interests to all farmers without bias for the revival of crop and livestock farming in the region.

Mr Bett disclosed that the welfare of Muslim farmers; who have been locked out of loans offered by many financial institutions has been factored in, adding that interest free Sharia loans would be availed to them with ease.

He pointed out that Marsabit office whose construction is being funded by USAID Kenya at a cost of Sh 24 million would serve to ensure that the enormous agricultural potential is exploited to enhance production for development.

”This corporation will ensure that farmers access affordable loans and service their agri-business needs in a flexible manner,” said Mr Bett.

The chairman who was accompanied by the corporation’s acting managing director Rose Ochanda and the USAID Kenya’s Feed the Future director of operations and grants Mary Kioko said the new branch would be operational by April next year.

He underlined that the corporation was aiming at supporting the enhancement of lives of farmers especially women and youths engaged in agri-business activities.

Currently, farmers in need of credit from AFC have been traveling over 300 kilometers to Meru for the essential service since the corporation closed its branch in Marsabit in 1989 owing to scaled down financial operations.

Mr Bett assured that the loans would be processed fast at a lower interest rate of 10% compared to the offer by commercial banks of 13%.

Marsabit Central deputy county commissioner Patrick Muriira expressed optimism that the AFC entry into Marsabit County was going to promote agriculture and address the issue of dependency on relief food in the region.

Mr Muriira urged farmers who mainly do livestock farming to adapt to climatic and other risks by diversifying their farming activities to beekeeping, poultry and fish farming.

This, the deputy county commissioner said, would open avenues for value addition and better marketing chains which will make the venture viable and sustainable in line with the government’s big 4 agenda on food Security.

Local farmers welcomed the move by the government to take the financial services to their doorstep saying that they expected adequate funding to enable the revival of the sector.

Nearly thirty years ago, farmers in the county used to produce food far in excess prompting the government to open up a national cereals and produce board (NCPB) depot in Marsabit town only for the sector to collapse over reasons that still bog the minds of residents.

The food silo that was established to help in storing excess food produced in the county is ironically now a relief food store.

Mr Isaak Oto, an AFC client since those days, complained that most arable land is lying idle due to lack of financial support to farmers.

Mr Oto observed that the re-entry of the corporation in Marsabit could help in reviving both crop and livestock production and also facilitate starting of cottage industries like those of cheese making, flour milling and milk pasteurizing and packaging.

A livestock farmer from Karare area and who runs a milk supply business in Marsabit town Ms Angelina Matacho welcomed the development saying that increased loaning to farmers would greatly lift the viability of both crop and livestock farming.

“People of this county are happy with the arrival of AFC because this is a sign of good agricultural prospects’, she said.

Ms Kioko said that it was within USAID’s journey to self-reliance roadmap that its partnerships revolve around governments’ commitment and capacity to plan and implement solutions as was the case with the AFC,

She said that her organization would continue to support both levels of government as the administrations seek to transform the lives and livelihoods of the people.

Ms Kioko said that the establishment of the branch was set to benefit over 2000 farmers along the key livestock and other agricultural value chains.

She called on the community not only in Marsabit but from across the region to take advantage of the branch to access financial products to support their businesses and strengthen the market systems.