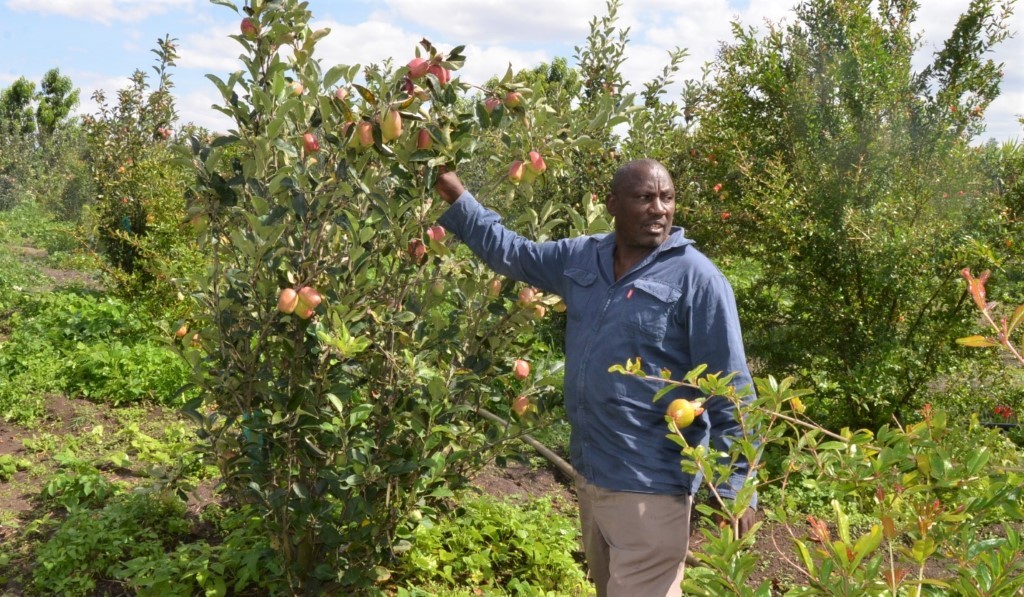 At first, you would be mesmerized by the entire beautiful scenery of cool shades and ripening fruits of rare species everywhere such as rare varieties of apples, pomegranates, dragon fruits, peaches and common ones such as pepino melons, guavas among others, which all give one an impression of how the Garden of Eden must have been.

“Welcome to the garden of Eden,” Wambugu welcomes us in his 23 acre-farm where he has planted thousands of these rare varieties of fruits with the most predominant being apples. This has been an art that he has perfected for the last three decades and made him a sensation in the media and farming circles.

Out of curiosity, we decide to peruse some pages of his visitor’s book before we append our signatures and we bump on some high profile individuals who have paid his farm a visit, including ICT CS Joe Mucheru, Trans Nzoia Governor Patrick Khaemba among other international and local visitors.

Wambugu’s story dates back to 1985 when he started cultivating apples on a small scale at his ancestral home in Tetu Constituency, Nyeri and managed to secure an order to supply a tourist hotel in Nanyuki Town with the fruits.

Unable to cope with the rising demand, Wambugu started thinking of ways of increasing the supply until he got wind of wild apples growing within the neighbouring Aberdares Forest and started picking them.

He went ahead and transplanted some of the seedlings in his farm and grafted them with the regular hybrid varieties and this gave rise to ‘Wambugu Apple’ that has to date become his brand name.

Unlike the conventional apples that are round in shape, Wambugu’s apples have elongated oval shape and have undergone tests with the Livestock Research Organization (KARLO) and given a clean bill of health.

The introduction of apple farming in the country dates back to the colonial era where history has it that a white settler started cultivation until the time of leaving when the country attained independence. The story continues that as he was leaving, he decided to destroy the trees so that locals may not pick up the practice.

In the process however, freedom fighters got wind of what he was doing and raided his farm and took some seedlings that they went ahead and planted within the Aberdares Forest that served as their main hideout.

It was from here that Wambugu stumbled on them and introduced them in his small Nyeri farm as well as graft with other varieties.

With the proceeds, the 65-year-old farmer purchased 23 acres of land in Laikipia and relocated his business where he is now able to do it on a large scale as well as run a nursery for various varieties of fruits.

36 years down the line, the farmer has roped in his entire family into fruit farming, growing the popular ‘Wambugu Apple’ alongside the other varieties he has been steadily introducing. He says that despite it being a labor-intensive venture, the returns are good even as he shies away from the discussion of how much he makes from the proceeds.

“It is a profitable business because we no longer walk on foot, all my four children are driving and living comfortably,” says Wambugu.

“A 90 kilo bag of peaches sells at Sh. 180, 000 while a full grown apple tree can produce 4, 000 fruits in one season and mathematically speaking, this should tell you that there is value in this business,” says the farmer.

He says there is a huge local and international market for fruits that has been growing steadily over the years and challenged the large chunk of the unemployed youths to consider venturing in the trade.

The farmer says the interest for his produce of fruits and seedlings has been growing and he is receiving orders from various parts of the globe including America, Europe as well as in some countries in Africa.

“I have raised and educated my children with some to the degree level from this venture and upon completion of their education, all of them decided to join me,” Wambugu said.

He continues that some of his children have also been going to various countries in the continent such as Nigeria, Malawi, Botswana and Malaysia to sell the seedlings and offer extension services as demand keeps growing for his products.

He adds that the secret behind the growing demand for his fruits is because they are naturally grown with no chemicals added on them as the demand for organic foods keeps on rising globally.

Wambugu says he usually concocts his own chemical from a mixture of Aloe Vera, Mexican Marigold and pepper to repel pests.

To ensure constant supply of water in his farm, Wambugu has sunk a borehole and dug water pans from where he is able to pump water to his plants using drip irrigation. At the base of every plant, he has also planted legumes such as beans to provide the much-needed nitrogen.

He urges the government to collaborate with him to sell the idea and his art to Kenyans especially the unemployed, as he believes that there is a huge opportunity in fruit farming enough to transform the fortunes of many people and the country at large.

“The government can as well buy each young person 10 seedlings of these exotic fruits for a start and by so doing we will to some extent, be able to alleviate the perennial problem of joblessness in the country,” says the farmer.

In future, the farmer hopes to expand the business and start doing value addition to some of the products such as apples to produce juice and wine.