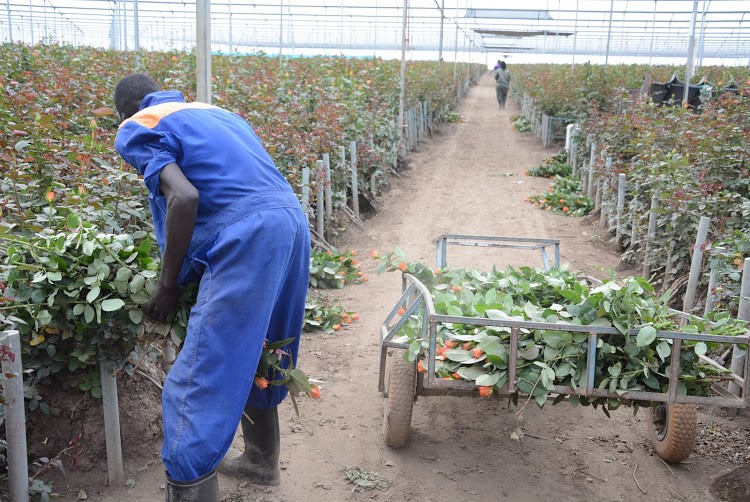 A number of flower farmers in Naivasha have resumed production and exportation after a month of financial and job losses due to the Covid-19 pandemic.

The resumption has been attributed to the increase in cargo flights and partial reopening of supermarkets in some European and the Dutch auction.

The owner of Maridadi flower farm Jack Kneppers said with an increase in production, some of workers who had been sent on unpaid leave have now been recalled with hopes that demand for the exports will increase and be sustained in the coming weeks.

With production on the rise, the farmers have however been forced to introduce stringent measures including taking of temperatures and provision of masks for their workers to contain the spread of the virus at the farms.

Kneppers added that the farm was shipping out flowers four times a week unlike in the past where daily production went to waste.

He attributed this to the reopening of the Dutch auction and some supermarkets in Europe where they shipped majority of their flowers.

“At the moment we are shipping out over 50 percent to the European market and disposing around 20 percent on the days that demand is low,” he said.

Speaking at his farm, Kneppers said that they had been forced to uproot 15 percent of their crop due to the crisis caused by the pandemic. Adding that they were happy now that the situation is improving by the day.

On safety measures, he said workers had been provided with face masks and were observing social distancing as per the government directives.

“We are making sure that every morning and afternoon the workers temperatures are recorded and they wash their hands every now and then,” he said.

The supervisor in charge of grading section Ruth Oyack said that the company had retained all its workers despite the current crisis.

She added that they were keenly following up the laid out regulations by providing their workers with masks and sanitizers.

Speaking earlier, the CEO Agricultural Employers Association (AEA) Wesley Siele said the drop in the exports had contributed to the limited movement of consumers in Europe.

He added that supermarkets mainly in the UK, Sweden and Russia were still ordering the fresh produce from the country though high flight charge was the main challenge.

In recent times, the Embassy of the Kingdom of Netherlands through a press release announced additional cargo flights exporting 45-50 tons of cut flowers and other perishable products from Kenya to the Netherlands.

Flower exports are among the country’s top three foreign exchange earners generating in excess of Kshs 104 billion annually. Netherlands accounts for the largest export market for Kenyan products in Europe and the leading destination for Kenya’s cut flowers, vegetables and fruits.