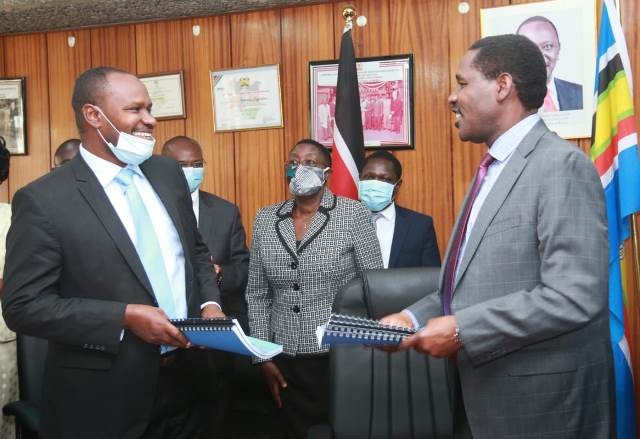 The government has received a Sh10 billion concessional loan from the World Bank to improve governance and management of marine fisheries and aquatic resources.

Signing the County participation agreements with Kwale, Mombasa, Kilifi, Tana River and Lamu at Kilimo House, Agriculture and Fisheries Cabinet Secretary Peter Munya said that the project will be looking at supporting high value agriculture value chains such as moringa, chili and oil crops, which will promote job creation and incomes for the displaced fishermen and their dependents.

Munya said that the Ministry targets to move the 13,000 fishers who are small scale and concentrated in near shore to the deeper waters by building their capacity and training them to venture into the territorial sea and the Exclusive Zones fisheries.

“To date, the government has already trained 100 fishermen in Kilifi and 86 in Lamu so that they can participate in the deep water fishing and that for the other three coastal counties, the COVID 19 pandemic interrupted the training but this will resume so that all the five counties are covered.” Revealed the CS.

Munya further revealed that the Kenya Marine Fisheries and Socio-Economic (KEMFSED) Project will promote investment in marine fisheries and coastal aquaculture (mariculture), as well as strengthen the livelihoods of residents at the coast.

“The KEMFSED project covers a period of five years and its overall goal is to enhance economic benefits and coastal livelihoods from marine fisheries and coastal aquaculture while safeguarding associated ecosystems’ integrity.” Noted the CS

The project, he explained is based on two problem statements namely weak governance of marine fisheries that adversely affects the sustainable generation of optimal benefits for the overall economy and coastal communities and also coastal communities that are poor, have narrow income base, and depend on fisheries for livelihoods which leads to overfishing pressures.

“The project design has therefore adopted two principles of fisheries management that needs to be strengthened and also associated, cooperation of the private sector and coastal communities which is essential,” he said.

Munya noted that food and nutrition Security is paramount for health thus fisheries provide high and easily absorbed protein, minerals and oils which can reduce malnutrition among the population making them healthy.

KEMFSED project, the CS noted comes at an opportune time considering fish is the most traded commodity in the world and being labor-intensive, generates many jobs.

“Let us promote circular economies in order to maximize the returns from the fisheries as well as protect the aquatic ecosystems,” he said

Through the large number of skilled fishermen, the CS said the government will place Kenyans in industrial fishing boats thus increasing employment for the youth in the fishing industry.

“We expect that the fishermen will form stronger associations that will enable them own semi-industrial and industrial fishing vessels to participate in the tuna and tuna-like fishery currently dominated by the foreign fishing companies,” he said.

The project will support the fishermen and institutions charged with data collection and enforcement and ensure they are provided for in alternative livelihoods with counties providing the technical back stopping on the livelihoods support projects.

The project, CS Munya confirmed will be officially launched imMediately after post-COVID 19 opening either end of June or beginning of July at the Coast in one of the Counties.

Meanwhile, Fisheries and Aquaculture Principal Secretary Prof Micheni Ntiba said the potential of Kenya’s marine fisheries which is 300,000 metric tonnes has not been exploited and thus the support from the World Bank and government will be able to transform the marine fisheries for the next five years.

He added that they are in the process of coming up with a marine spatial plan that brings together multiple users of the ocean who will assist in making informed and coordinated decisions about how to use marine resources sustainably and also protect and conserve the marines.

“We are also setting aside a 30 percent Marine Protected area for restocking and conservation of fish in the five-year program. Currently we have 17 deep-sea fishing machinery that will also assist the youth when fishing,” Prof Ntiba said.

Under the Kenya government’s Big Four Agenda, fisheries sector targets to increase production of fish from all sources including marine fisheries from the current 9,000 Mt to 24,000. The project targets to benefit poor households living in the riparian 19 sub-counties, 98 Wards of the five coastal counties.