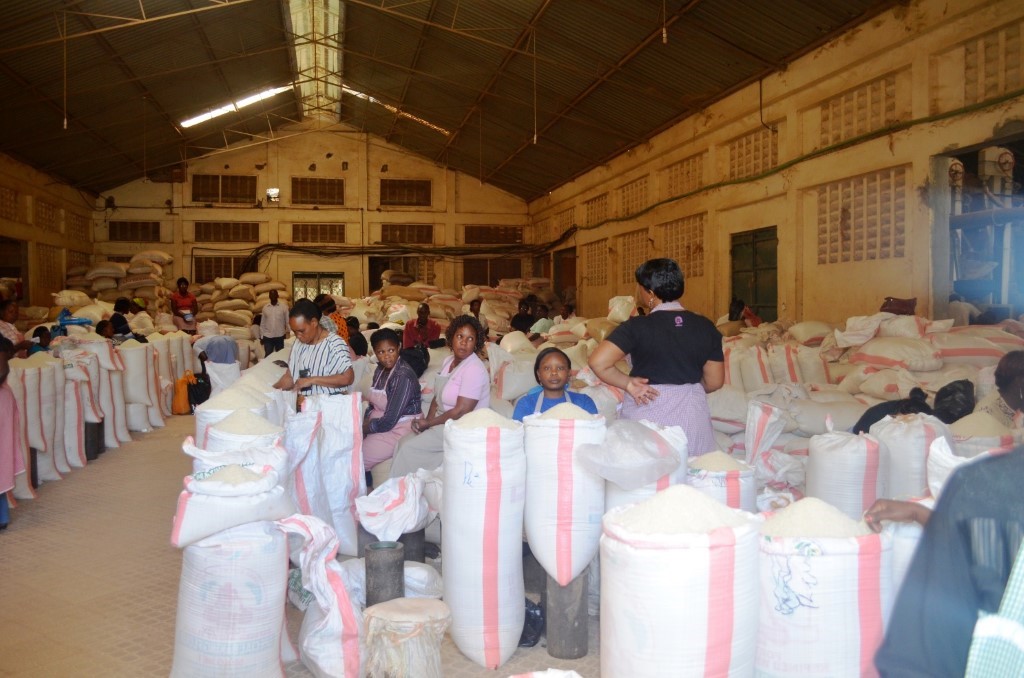 Mwea farmers are a happy lot and have hailed the government decision to set the price of a kilo of paddy at Sh85.

The announcement made by President Uhuru during his tour of Kirinyaga County in early February this year saw a kilo of paddy rice rise from the previous Sh55 to Sh85, an increase of Sh30.

Mwea Irrigation Scheme Manager Innocent Ariemba, says the partnership of involving the government in the purchase of excess rice has succeeded in driving bulk procurement and distribution of Kenyan Rice in support of the local farmers.

“The Kenyan rice has two varieties namely: aromatic rice, popularly known as Pishori and non-aromatic rice commonly known as Sindano which are of high quality compared to imported alternatives in the market place,” Ariemba said

He said the aspiration of the stakeholders along the rice value chain and the intervention of the government have transformed and enhanced small-scale farmer incomes of the individual farmers.

“We are targeting the aromatic Pishori Rice which is mostly produced in Kirinyaga County’s Mwea area and is packed and distributed by various entities such as Mwea Growers Co-operative Society (MRGCS)” he said.

According to Ariemba, the government has been working with established societies like the Mwea Rice Growers Multipurpose Society Limited which serves a large pool of rice growers and they currently have over 4 million kilogrammes of premium graded Pishori rice in their stores.

He noted that the stocking levels are expected to rise to 6 – 8 million kilos in three months and further to 13 million by end of March 2021.

Ariemba said the National Irrigation Authority has now undertaken to address the challenges facing the farmers in the scheme which includes a shortage of water, diseases, and pests.

“Our intention is to increase the individual farmer’s profitability as well as minimize the cost of production,” Ariemba said.

He said the government is in the process of finishing up the construction of Thiba Dam which is expected to be completed by June 2021.

The dam, he said will enable rice farmers in the entire scheme carry out two rice crops as compared to the current situation where they carry only one.

He explained that for the moment farmers have been introduced to a water saving farming method ‘Water Saving Rice Culture’, a model that has helped minimise water usage by 30 percent.

“This is a process where farmers wait until the soil dries up, then more water is added. It has enabled them to irrigate 26,000 acres of land,” He said.

The Irrigation Scheme Manager noted that the rice sector has also been affected by the Covid 19 pandemic which has reduced intake of rice by many public institutions which have closed down thus affecting the demand for rice.

He explained that as a result the uptake of rice by the Kenya National Trading Corporation has rapidly decreased, but normal operations will resume as soon as the situation normalizes.

“Consultations are still ongoing so that Mwea Rice Growers Multipurpose Sacco, which buys rice on behalf of farmers, will have the capacity to continue taking in more rice,” He added.

He said that farmers are also being encouraged to go for an alternative crop for the care and improvement of soil.

Ariemba added that this year farmers expect to harvest close to 115 metric tons of rice amounting to Sh7 billion.

He noted that the putting up of Sh600 million by the government early this year for the purchase of the rice paddy has managed to regulate the market and exploitation of farmers.

“All the efforts we are putting together is to make sure we double the rice production in order to help meet the huge deficit of rice supply to the country,” he asserted.

He explicated that the country imports 75 percent of the rice consumed in order to meet the demand for the grain. “This should not be the case in an agriculturally rich country like ours,” he said Currently, the demand for rice per individual per year is 20.6 kgs.

The National Rice Development Strategy (NRDS) of Kenya forecasts that in order for the country to attain self-sufficiency by 2030, the total domestic rice production must increase at a rate of 9.3 percent per annum.

To this end, the manager said the scheme will provide the necessary support in terms of farm inputs and capacity building to the rice farmers to enable them step-up production.