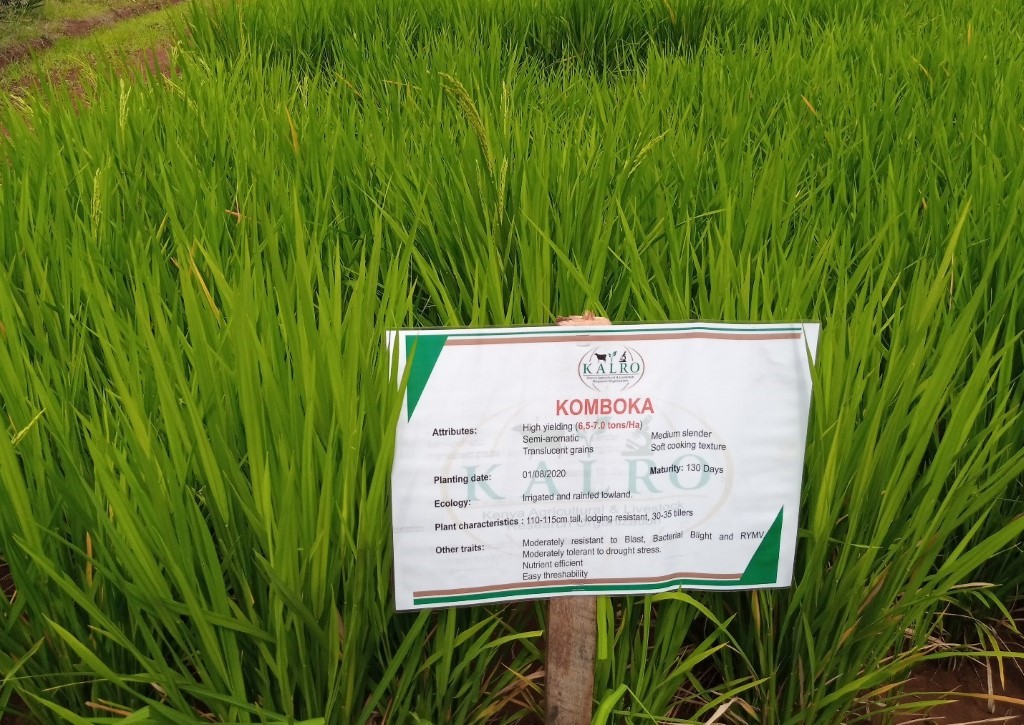 The new variety known as Komboka has the potential to be produced for the mass market thus reducing the country’s reliance on imports.

The Komboka rice variety is sustainably grown as it requires less water making it suitable for both irrigated and rain-fed lowland ecologies.

To this end, it can be grown in different parts of the country such as Mwea, Ahero, Taveta, Kilifi, Kwale, Bura, Hola, Bunyala, West Kano, Lower Kuja, Busia, Alupe and any other rice growing area in Kenya.

Speaking during the launch in Mwea, KALRO Director General Dr. Eliud Kireger said Kenya’s domestic rice sector has not satisfied the increasing demand for rice; which is exacerbated by the population growth of the middle class and urbanization of people who are increasingly relying on rice for food.

Being an improved innovation, the variety can double the production, up to seven tonnes per hectare compared to what is currently being produced.

The new variety has desirable attributes to both consumers and producers as farmers can now consume and grow it for sale, unlike before where most farmers were just producing the Basmati variety for selling as it fetches more money.

“The basmati rice is expensive rice and farmers would rather sell it and buy Pakistani rice which is of poor quality and cheaper. With this one, they will fetch more money and also eat it,” the DG noted.

The commercial varieties available in the country are low yielding and restricted to lowland irrigated ecologies.

The new variety was established in partnership with International Rice Research Institute (IRRI) after years of collaborative research.

Dr. Kireger called upon the private sector to get involved in the commercialization of the Komboka variety because of its high productivity and profitability potential.

According to the DG, the rice variety is also in line with National Rice Development Strategy (NRDS 2019- 2030) overall goal of increasing food Security and incomes through sustainable rice production.

He further encouraged the private sector to also take up other varieties not only for rice but other crop varieties from breeders so that they can avail certified seeds to the farmers.

“We are coming out and partnering with private sector and specifically the Mwea Rice Cooperative Sacco, who are licensed seed producers and as KALRO we give them the basic seeds which we have bred and they in turn, are going to multiply and produce the seeds that can be availed to the farmers,” he said.

In his address, Dr. Kireger noted that 24 acres of seed is planted in Mwea and this is expected to increase ten-fold by next year and hopefully farmers pick it up.

He added that the seed is also available currently and since the uptake has been low, government is promoting it to create awareness of the benefits of growing it.

“We expect to get about 1000 metric tonnes and that will be of the certified seeds which will now go into rice production,” he said.

Dr. Kireger said the Komboka variety is expected to fetch a good price as it is better than other local varieties and more people will be able to grow it for food as opposed to the imported varieties which have high chemical content and not of very good quality.

Importation rice Bill currently is about Sh. 23 billion per year. If the country could produce good quantities of Komboka rice, importation will go down and this in turn will contribute to bringing down the bill for importation of rice.

According to Dr.  Rosemary Murori, a rice breeder who works IRRI, the advantage of this variety is that it has higher yields compared to the Basmati rice and with good management a farmer will produce 40 bags of 100kgs per acre compared to Basmati which will yield 20 to 25 bags.

Dr. Murori also noted that research is ongoing and they are in the process of improving the Basmati 370 variety.

The Komboka rice variety, is semi-aromatic, has long slender grains and soft cooking texture. The plant height is 110 – 115 cm, does not lodge and matures in three and half to four months (110 – 120 days).