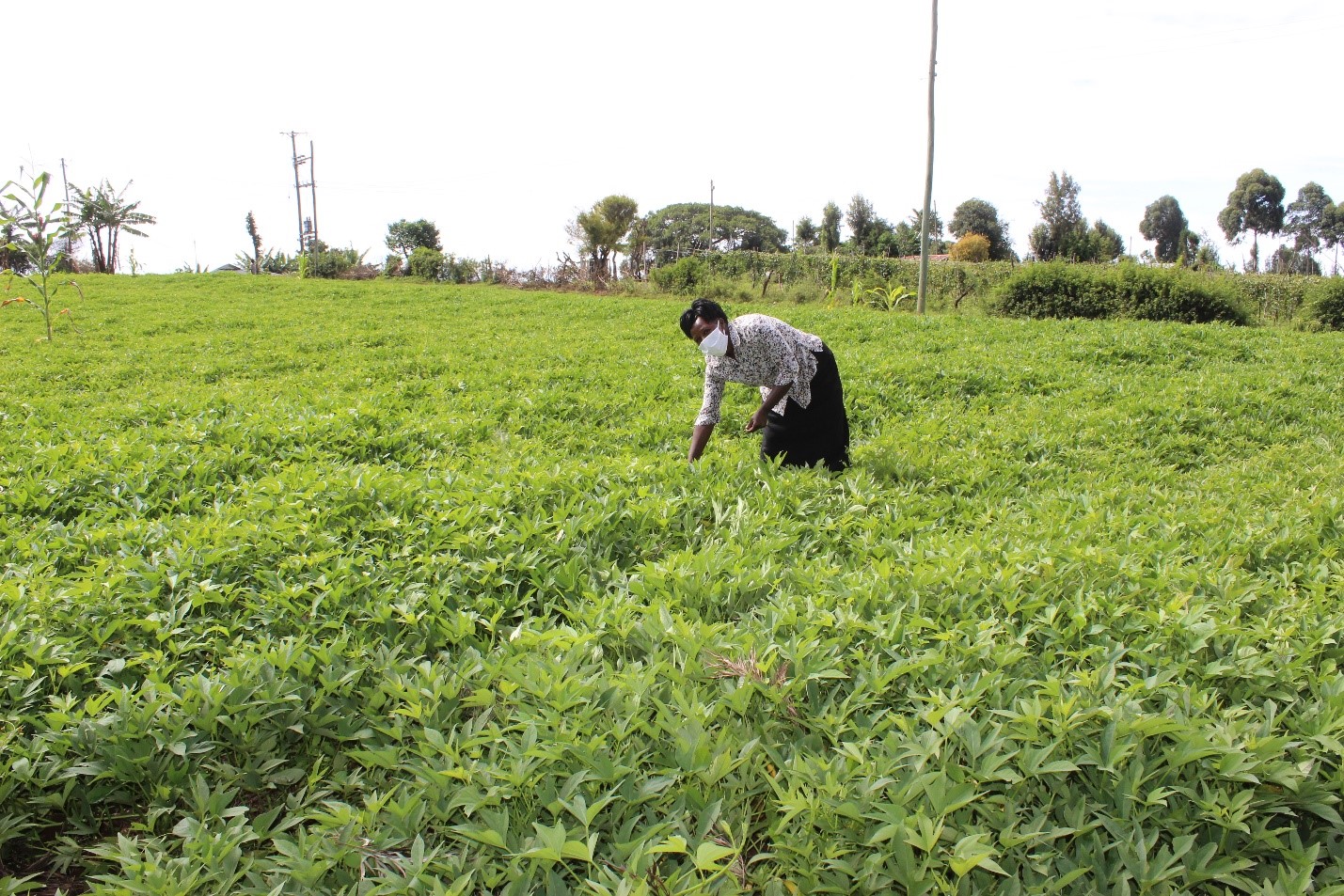 Mrs. Lilian Kiptoo got married imMediately she cleared her secondary school education. Having never attended any college education, she has never been formally employed, and ventured into Agriculture by default.

Her young family then did not have enough land and therefore with the help of her husband, she leased an acre not far from her home in Kessup, Keiyo North Sub County.

“The owner of the land which touches the Iten-Kabarnet road had left it idle as it was full of rocks and therefore very difficult to undertake any kind of farming,” she said.

However, being one not to give up, she embarked on first removing all the stones before preparing the land for farming. “In fact the owner could not believe it when he saw what the once rocky piece had turned out to be,” the mother of six said.

She decided to plant tomatoes which normally do well in the escarpment, it did not disappoint her. She managed to get sh.600,000 from the sale of the tomatoes in the nearby Iten market.

As she continued with her venture she realized she was facing a lot of challenges in the transport of her produce. Using proceeds from the tomatoes, she bought a pick-up which enabled her to distribute the tomatoes to her rapidly increasing customers.

After buying the pickup, she then focused on expanding their farm and was lucky because the owner of the piece she had leased agreed to sell it to her family for sh.500,000. “That year, I sold tomatoes worth sh.400,000 so we only added sh.100,000 and we bought this farm, she said.

Mrs Kiptoo says one thing that has worked for her is the availability of water which flows from the highlands naturally and therefore helps her do irrigation farming when it is dry.

Her efforts were recognized by the department of agriculture who have empowered her with constant training to improve on agriculture.

As she improved in her venture, her neighbours recognized her efforts and proposed that she represents them in the defunct Iten Tambach county council.

In the two elections, Mrs. Kiptoo said she was not sponsored by the party but used her own resources. “However after 2013, I had learnt my lessons and decided to quit politics and concentrate on farming,” she said.

While maize farming is common in the area, Mrs. Kiptoo says she prefers horticulture due to its ready market. “This time around I decided to add traditional vegetables like managu and carrots and managed to sell managu worth sh.300,000,” she said.

The journey back to her feet had slowly began. With the proceeds from the one acre the family was able to buy more land where they are planning to construct rental houses.

Her other big break came last year after she was selected for contract farming by Kenya Agricultural and Livestock Research Organisation (Kalro) through the World Vision.

They therefore needed to contract seed multipliers who would grow sweet potato vines which would later be distributed to other farmers. The department of agriculture, having worked with Mrs. Kiptoo, did not hesitate to propose her name among others.

She says the preparation and planting is no easy work and is also capital intensive saying most of her neighbours with whom they started surrendered. “Infact I was forced to take up two other farms from my neighbours who gave up,” she said.

“Since December when we started land preparation to date I have had to hire casuals who I pay at sh.300 each per day, this is exclusive of their lunch which I have to prepare,” Mrs. Kiptoo added.

“For instance a time like this when we are harvesting, I hire 12 people per day, I therefore need to have sh.3,600 every day because if I don’t give them their dues they will not come back tomorrow,” she said.

She says the current Covid-19 period has been a blessing for her as some of her children who are in college are now home and therefore helping her at home and also in the shamba.

On the day when we visited the farm, World Vision had come to pick the vines which they buy at one shilling each and from only a third of the farm, she had harvested over 300,000 vines.

Mrs. Kiptoo advises that Kenyans should consider investing in agriculture to address the rising cases of unemployment in the country. She says while one needs funding, passion and patience is everything as it drives one despite the challenges.